I only seem to be making it to the Sunday Salon every few weeks lately! But I know that some folks really only read the Salon posts, so I like to drop a little recap/preview-type thing in here every now and then.

I missed Bloggiesta last weekend, and I’ll probably–at least officially–miss the 24-Hour Readathon this coming weekend. I had a good excuse for not doing Bloggiesta, but since it involved my being away from home for an entire weekend, I didn’t really want to be “away” again so soon–and if you’ve done the Readathon, you know it DOES feel like checking out for most of a weekend! I’ll read and cheer readers on whenever I can next Saturday, but I won’t be signing up this time.

While I wasn’t Bloggiesta-ing, I was participating in something that I think will have long-term effects on my blogging and how I live my online life, but it will take some time for me to process it all and I may never post a proper recap. (Four of my Creative Alliance ‘12 “sisters” have assembled an “epic” one at She Posts.) But I’m working on a post concerning “indie authors” that was directly inspired by a CA’12 breakout session–I hope to have it up here later this coming week–and I’ve already shared the piece I read aloud at our closing event last Saturday night. (I’m sharing some of the others in a Readlist.) 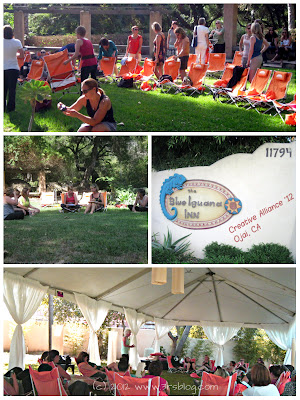 “Connections” were the theme of CA’12–creating “authentic alliances”–and so it seems like perfect timing that my own “connection project” launched this week! The Book Blogger Buddy System was born in my mind just after Book Blogger Appreciation Week, and is being graciously hosted at The Estella Society, where you can read all about it and sign up if you want to! The first round of sign-ups will close on October 12, and I plan to open up again for another match process in about six months. I’m thrilled with the response so far–and pleasantly surprised by some of the bloggers who’ve gone for it, although I can’t tell you who they are–and hope this will be a great experience for everyone!

This week was also Banned Books Week, and I actually read both of the books I’d planned for it. I posted about The Chocolate War by Robert Cormier on Thursday as part of Sheila’s “Jump on the Banned Wagon” event, and will post about The Outsiders by S.E. Hinton in the next day or two (hey, I read it during Banned Books Week, so it counts!).

And now we’re into October. I’m not participating in R.I.P. or Dueling Monsters or Mx3, and I don’t even like Halloween all that much, but I’m thinking I’d like to play along and do some seasonally-appropriate reading this year anyway. These are my candidates:

I don’t know if I’ll get to all three, and If I can only read one I’m leaning toward Gone Girl for the “everyone’s talking about it” factor, and I may be ready to start it today! But before I do, how would you suggest I prioritize these?

Have a great Sunday!