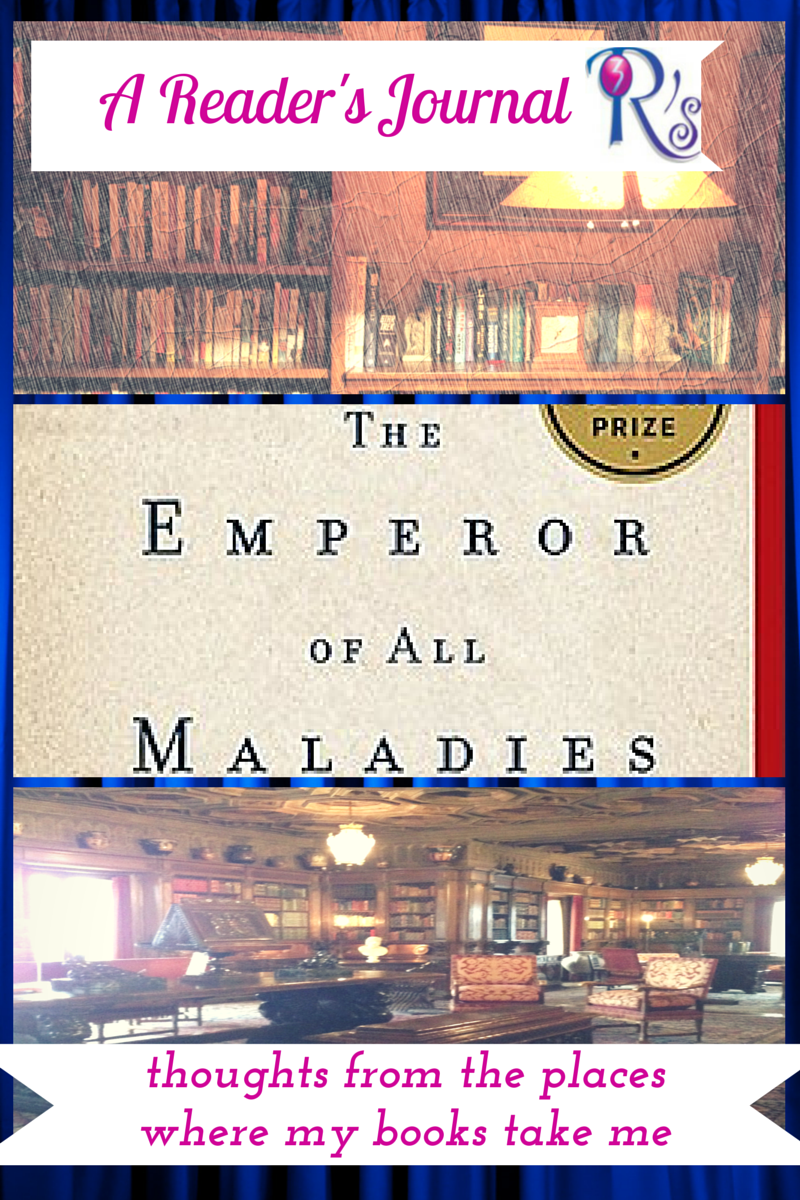 In January of this year, my husband Paul was diagnosed with a melanoma. The growth was surgically removed and biopsied, as was a lymph node. Both came back clear—the cancer had not spread. Less than 48 hours after we received this news, my 20-year-old stepdaughter Kate was diagnosed with Acute Lymphocytic Leukemia (ALL) and admitted to City of Hope, a National Comprehensive Cancer Center, to begin an intensive 28-day chemotherapy regimen. She has responded well, and will be continuing treatment and testing on an outpatient basis for the next year or so with the goal of maintaining those good results.
My usual response to health crises is to gather information. When my mother was identified as having early-onset Alzheimer’s, I looked for books. When it became apparent that 2015 was to be my family’s Year of Cancer, I went straight to a book, Siddhartha Mukherjee’s Pulitzer Prize-winning “biography of cancer,” The Emperor of All Maladies, and since it’s a book that well exceeds the 400-page “chunkster” threshold, I sought it out as an audiobook. There’s a good chance that the 20-plus hours I spent reading it may be some of the most rewarding time I spend with a book this year.

Five Things I Learned From This Book:

Mukherjee, a Boston oncologist, opens The Emperor of All Maladies by introducing his patient Carla, a young mother of three who was diagnosed with ALL in the spring of 2005. At that time, the ALL recovery rate was around 30%. When Kate was diagnosed this past February–a decade later than Carla, and nearly five years after this book was first published–we were told that the cure rate was around 80%. (The cure rate for children with ALL, the most common childhood cancer, is even higher.)
Carla’s case is revisited later in the book, along with those of other patients, after Mukherjee explores historical (mis)understandings of the nature of cancer and surprising discoveries of causes and treatments before the modern era of medicine. The 20th century brought refinements in surgery, the discovery of radiation, and the development of chemotherapy as advancements in treatment, while research in cellular biology and genetics increased understanding of what cancer is and how it occurs. The successes and failures of clinical trials become a large part of the cancer story at this point, and Mukherjee portrays some of them dramatically. However, the relationships between science, money, and public policy are also significant–perhaps more so, as they drive much of the clinical work in one way or another; the book gives them plenty of attention as well, including an enlightening discussion of how reactions to the AIDS crisis influenced cancer activists.
I was born in the mid-1960s, and when I was a kid, most children with cancer didn’t survive it. Huge leaps in understanding cancer and treating it more effectively and less disruptively have made the prospect of “life after cancer”–in many cases, decades of life–absolutely attainable, and it’s rather awe-inspiring to realize that all this progress has occurred during my own lifetime.
The Emperor of All Maladies was a tremendous eye-opener, and made an intimidating subject approachable. I’ve known about it for several years, but never had any desire to read it until cancer invaded my family. I absolutely recommend it if you find yourself in the same unfortunate position–although I hope you never do–especially if you’re like me and find some degree of comfort in knowledge. I’d encourage you not to wait until you’re in that unfortunate position, though; read it anyway.
Rating: Book, 4 of 5; Audio, 3.75 of 5
———————————————————————————————————————-
Book description, from the publisher’s website:

Winner of the Pulitzer Prize, The Emperor of All Maladies is a magnificent, profoundly humane “biography” of cancer—from its first documented appearances thousands of years ago through the epic battles in the twentieth century to cure, control, and conquer it to a radical new understanding of its essence.

The story of cancer is a story of human ingenuity, resilience, and perseverance, but also of hubris, paternalism, and misperception. Siddhartha Mukherjee recounts centuries of discoveries, setbacks, victories, and deaths, told through the eyes of his predecessors and peers, training their wits against an infinitely resourceful adversary that, just three decades ago, was thought to be easily vanquished in an all-out “war against cancer.” The book reads like a literary thriller with cancer as the protagonist.

From the Persian Queen Atossa, whose Greek slave may have cut off her diseased breast, to the nineteenth-century recipients of primitive radiation and chemotherapy to Mukherjee’s own leukemia patient, Carla, The Emperor of All Maladies is about the people who have soldiered through fiercely demanding regimens in order to survive—and to increase our understanding of this iconic disease.

From the Prologue:
“On the morning of May 19, 2004, Carla Reed, a thirty-year-old kindergarten teacher from Ipswich, Massachusetts, a mother of three young children, woke up in bed with a headache. ‘Not just any headache,’ she would recall later, ‘but a sort of numbness in my head. The kind of numbness that instantly tells you that something is terribly wrong.’
“Something had been terribly wrong for nearly a month. Late in April, Carla had discovered a few bruises on her back. They had suddenly appeared one morning, like strange stigmata, then grown and vanished over the next month, leaving large map-shaped marks on her back. Almost indiscernibly, her gums had begun to turn white. By early May, Carla, a vivacious, energetic woman accustomed to spending hours in the classroom chasing down five- and six-year-olds, could barely walk up a flight of stairs. Some mornings, exhausted and unable to stand up, she crawled down the hallways of her house on all fours to get from one room to another. She slept fitfully for twelve or fourteen hours a day, then woke up feeling so overwhelmingly tired that she needed to haul herself back to the couch again to sleep.
“Carla and her husband saw a general physician and a nurse twice during those four weeks, but she returned each time with no tests and without a diagnosis. Ghostly pains appeared and disappeared in her bones. The doctor fumbled about for some explanation. Perhaps it was a migraine, she suggested, and asked Carla to try some aspirin. The aspirin simply worsened the bleeding in Carla’s white gums.
“Outgoing, gregarious, and ebullient, Carla was more puzzled than worried about her waxing and waning illness. She had never been seriously ill in her life. The hospital was an abstract place for her; she had never met or consulted a medical specialist, let alone an oncologist. She imagined and concocted various causes to explain her symptoms—overwork, depression, dyspepsia, neuroses, insomnia. But in the end, something visceral arose inside her—a seventh sense—that told Carla something acute and catastrophic was brewing within her body.”