I’ve been taking part in the Music Diary Project this week, posting daily updates to it on Tumblr. At some point – once it’s over, probably, and in the mythical time when I have “more time” – I plan to go back through the entries and see what sort of thoughts they provoke. Most of the posts are just straightforward lists of whatever music I was listening to over a period of time, but a couple of them are pretty heavily annotated, and I’d like to to edit some of the others to add more of that.

I thought I’d share some samples here, with links to the Tumblr entries in case you’d like to see the full lists.

I don’t usually listen to very much music in the early morning – I’m usually catching up on the news and the traffic reports, except for the last 15-20 minutes of my commute. My Monday-morning list of songs from my iPod is pretty heavy on the commentary:

I play my iPod (via iPhone) throughout my workday. I listened to a Quickmix station on Pandora (Pop Rock. Classic Punk/New Wave, Adult Alternative, 80s Alternative) for half the day on Monday (this isn’t the whole list):

After lunch, I gave “Classic Indie” on Pandora a try (the link is to the full list):

I went back for more on Tuesday morning, but didn’t stay as long as I thought I would; the station was starting to repeat songs, and a lot of the songs it was playing were starting to sound a bit too much like each other. I’m glad I did get the opportunity to hear some acts that I’d only heard of up until then, though.

By Wednesday morning, I wanted to listen to my own music, so I cued up my main iPhone playlist and let it go all day:

Aside: It’s official – the “music of my life” now spans across six – SIX! – decades, and I think just about all of them have been represented.

I started the Project week comparing and contrasting two versions of “Hallelujah” (Jeff Buckley’s won). This is the kind of thing I’d like to do once the Project’s over and I can review the playlists, since I don’t think I’ll have the chance to do much more of it while it’s still underway.

Go on over and check out the full lists if you’d like to pass judgment on my musical tastes, and tell me if you’ve been listening to anything really good lately! 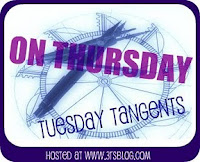